Learn about Walkie-Talkie - Switched on kids
Exploration and Fossils

A Walkie-talkie is a hand device, two way radio receiver/transmitter. It was developed in the Second World War. Radio engineer Alfred J. Gross worked on the early technology behind the walkie talkie between 1934 and 1941. During the war it was developed by Donald L Hings and engineering teams at Motorola led by Henryk Magnuski.

Typical walkie talkies today are phone sized and have a push to talk button. Walkie talkies are used for various reasons, in the military for amateur radio and for personal use.

The idea of walkie- talkies did not get much interest until the war started in 1939. After a few years the Motorola team had improved them, so that the army could use them. There were also vehicle and tank versions. The British, Germans and Americans all had their own versions.

Motorola also produced the hand-held AM SCR-536 radio during World War II and it was called the “handle talkie” (HT). The terms are often confused today, but the original walkie talkie referred to the back mounted model, while the handie-talkie was the device which could be held entirely in the hand (but had vastly reduced range.)

Make your child learn more about the Walkie- Talkie by providing them with FM Walkie- Talkie toy. It will boost their STEAM learning skills and will enhance their interest in science. SOK provides you the toy with the link mention below: 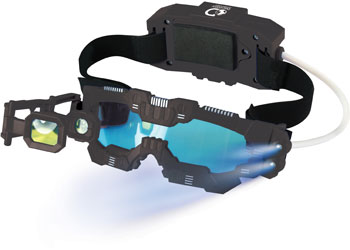